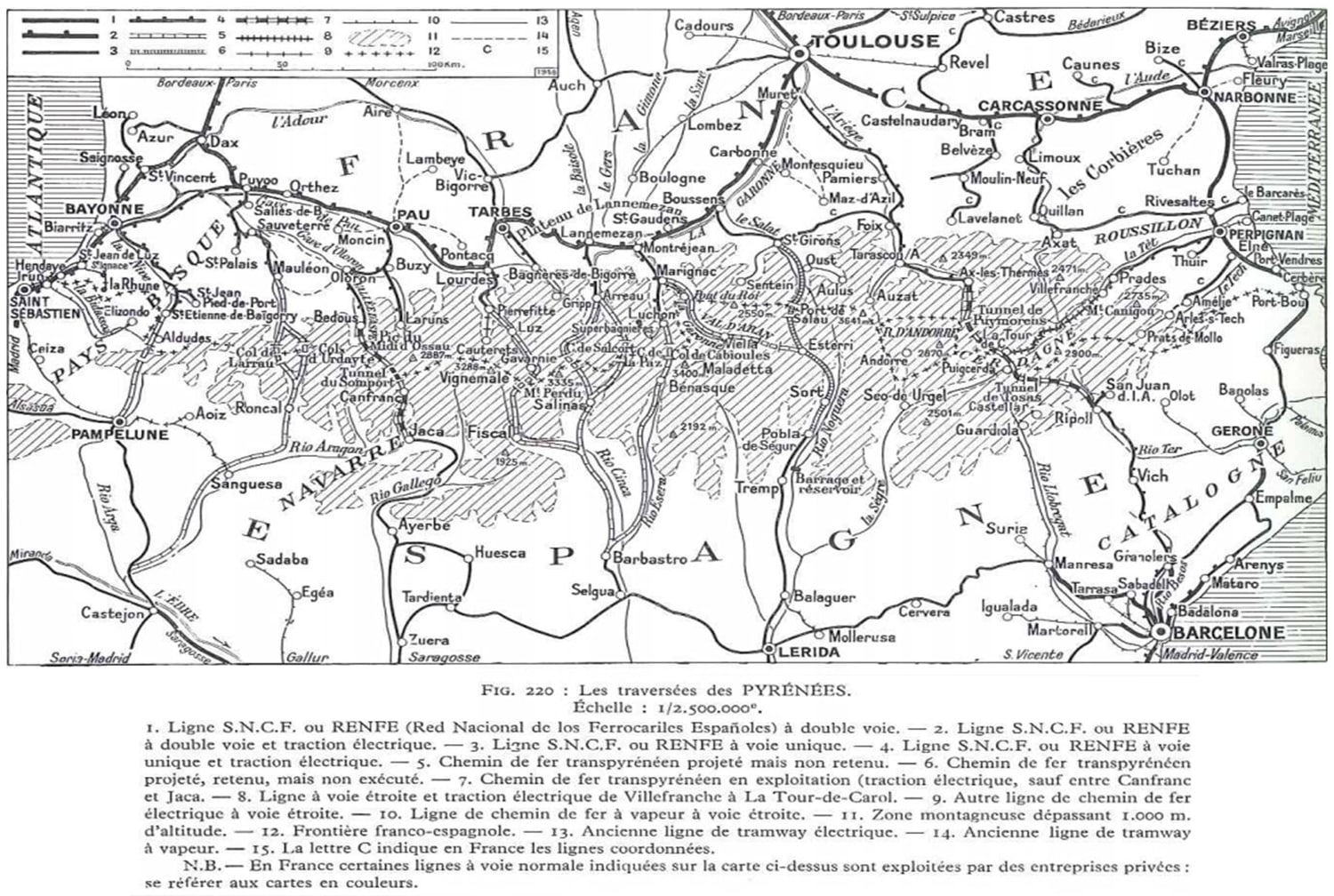 For a long time France and Spain have only been connected by two lines at each end of the Pyrenees: that of the Mediterranean coast, which connects Cerbère with Port-Bou (Narbonne-Port Bou line in service since 1878) and the coast Atlantic, from Hendaye to Irún (line Bordeaux-Irún in operation since 1864). Compared with the other trans-Pyrenean lines, today these two lines continue to absorb most trans-Pyrenean traffic.

In 1865, the idea of creating more trans-Pyrenean lines was already at the center of the debates..

A Franco-Spanish Joint Commission had even been set up to undertake studies: between 1865 and 1904, 12 voyage possibilities were examined. Finally, after several misrepresentations, an agreement was signed in 1904 between the Minister of Foreign Affairs and the Ambassador of Spain in Paris, who definitively agreed on 3 routes: by the port of Somport (west), by the port of Salau and by the Puymorens (to the east). It has been called in three routes western itinerary, central itinerary and eastern itinerary respectively. The Cerdagne line, of metric width, will also appear in this history. The map below illustrates these different paths.

As early as 1853 this Franco-Spanish communication was contemplated by the Somport port. It was designed to connect Pau with Zaragoza, passing through Olorón and Bedous (on the French side), the international station Canfranc (in Spain), and then through Jaca and Huesca (on the Spanish side).

Its construction began in 1908 with the drilling of the key work, the Somport international tunnel. The two drilling teams, French and Spanish, were found four years later, in 1912, at the end of the excavation of the 7875 meters tunnel. During World War I, although they did not stop being interrupted, the works of the international station underwent serious delays. The works on the Spanish side were carried out in parallel. The years 1926 and 1927 were dedicated to the ballasting of the tracks and to its electrification respectively.

The first train crossed the Pyrenees in July of 1928. The transpyrenean entered service after 20 years of works.

The characteristic elements of the line continue to be its strong ramps (it is the zip line with the most accent ramps of the time) and its helix tunnel to the height of Urdos, built between 1917 and 1918. The international station of Canfranc is also important, both for its dimensions and for its aesthetics. It is one of the few stations with two widths of tracks: 1,435 m for the French and 1,668 m for the Spaniards.

Between 1928 and 1970, two major wars, the Spanish Civil War and the Second World War affected the line. During the Spanish Civil War numerous disturbances took place, and the international tunnel was blocked from 1936 to 1940. In contrast, the Germans used the line during World War II although the sabotages of the caused disturbances. Between 1945 and 1948 the Francoists blocked the tunnel, cutting off international traffic.

The most important event remains the accident of March 27, 1970 occurred on the line of the French side, near Lescun. A train stops on a 35 mm ramp because of a lack of ice-induced adhesion, and it is put into braking. But a power outage leaves the convoy without braking, so that it begins to creep down the slope. He stops when one of the cars strikes the metal bridge of the Estanguet, dragging it in its fall to the river. Luckily, there was no regret for any victim. The stretch between Canfranc and the bridge of the Estanguet (towards Bedous) have not been used again.

Today, on the French side, the Pau – Bedous stretch is still being exploited. But its operation went from electric traction to thermal traction in 2008. The Pau – Olorón section was completely renewed during the second quarter of 2010, with a budget of 30 million euros. The renovation of the Olorón-Bedous section was renewed in June 2016.

In the Spanish part, at present the traffic is maintained until Canfranc, with two daily routes for passengers. In Canfranc specific facilities have been created to allow the loading of freight cars (to Spain) from trucks arriving from the French side. The section Zaragoza – Huesca has been renovated, passing to the standard track width UIC. In 2007 the new variant of Huesca, of 10.2 km, is in service, which allows to suppress six level steps. The Santa María and Peña – Anzanigo sections were renewed in 2004 and the Caldearenas – Jaca section between 2007 and 2010. Another more direct route between Huesca and Caldearenas is currently under study.

For more than 40 years, no cross-border traffic has ensured international communication due to the lack of an active cross-border rail link between Olorón and Canfranc, in spite of the numerous pressures exerted by multiple actors who claim certain openness.

This itinerary was never completed, neither on the French side nor on the Spanish side. It was planned that this route passed through Foix – Saint – Girons – Oust in the French part and by Sort – Tremp – Lérida in the Spanish part.

The French section Foix – Saint – Girons, with a single and normal route and 47 km in length, entered service in 1903 (the section Foix – Labastide – de – Sérou in 1902, and the rest in 1903). After World War I, the works of the Saint-Girons-Oust section were programmed. However, in the early 1930s, neither the western and eastern Pyrenean links that were in service at the time nor the economic crisis favored this central layout. In 1933, the National Economic Council decided to postpone works that would never come to an end, as the Spanish Civil War and the Second World War relegated them to oblivion. It is interesting to note that between 1914 and 1933 there was a 16 km railroad service for the tram between Oust and Aulus les Bains, with an interruption from 1915 to 1922. But this route was not part of the planned itinerary that was to arrive in Salau.

On the French side, the only section operated for commercial purposes was the Foix – Saint – Girons line, which closed to traffic in 1955. Today, this line is being transformed into a greenway (cycle route tourism and trekking).

On the Spanish side, the planned route was Lleida – Balaguer – Tremp – La Pobla de Segur – Sort and then Salau. For the same reasons as those set forth with reference to the French side, the itinerary only reached La Pobla de Segur. The Lleida-Balaguer section was inaugurated in 1924 and the section from Balaguer to Tremp in 1950. The line arrived in La Pobla de Segur on November 13, 1951. At present, there are three daily trains make the Lleida-La Pobla route.

Unlike the western Pau – Huesca link, this central link was never able to channel trans – Pyrenean traffic, since its construction never ended, and the two parts have never been communicated.

This line, which as its name indicates is the most located to the east, must connect two metropolis, Toulouse and Barcelona. More concretely, it must cross Foix, Ax-les-Thermes, Latour-de-Carol and Puigcerdá.

On the French side, there are four characteristic stretches:

The station of Latour-de-Carol, in addition to being an international station, has the peculiarity of having three track gauges: the normalized, the metric of the Cerdagne line (see next page) and the width of RENFE. In addition, it has three supply voltages: 750 V by 3rd rail, 1500 V DC and Spanish 3000 V DC current.

On the Spanish side, the line actually consists of two lines that have met together into one :

However, this Spanish line was not as productive as expected. As a result, little by little, sections were closed. In 1980, the Ripoll – Sant-Joan de los Abadesses section (which was not part of the trans-Pyrenean line) was closed to traffic, and today it has been converted into a greenway.

It should be noted that in 1984, the Puigcerdá line was included in the Spanish government’s program which contemplated the closure of more than 913 km of Iberian gauge line, but this program did not affect the line. The section Granollers center – Franqueses del Vallès, however, closed to the traffic of travelers and today is dedicated exclusively to the transport of goods.

Although trans-shipment of passengers or goods from one train to another at Latour-de-Carol international station or at Puigcerdá station (due to the difference in gauge) is essential, this eastern trans-Pyrenean line is the only one actually crosses the mountain range today.

The main objective of this eastern Pyrenean line is to connect the high plateaus with the rest of the Pyrenees Orientales and especially with the city of Perpignan. Before this line, the Perpignan – Villefranche line was built in 1885.

The line Villefranche – Vernet-les-bains to Latour de Carol, 62 km long, was built in two phases. The first stretch joined Villefranche with Bourg-Madame. The works of this section begin in 1904 and end in 1909, but the accident of a train during the test of load delayed another two years its entry into service. The commercial exploitation began on June 28, 1911. The ramps of this section reach 60 mm.

The second section connects Bourg-Madame with Latour-de-Carol, in order to allow a correspondence between Latour-de-Carol and Perpignan. This 6-kilometer stretch was completed in 1927.

This line of Cerdagne presents peculiar characteristics: it is electrified and fed by a third rail in direct current 850 V. In addition, its gauge is not the normal width of 1,435 m, but the metric width.